Business owner Paul Brockie has been impressed with the skills of his Burmese staff, but says their English needed a little work so that his customers could have the same confidence.

Now when insulation installer Johnsy Johnsy knocks on the front door of a new customer’s home, he confidently greets the homeowner in English.

Johnsy, a Burmese migrant whose first language is Hakha Chin, has his introduction all prepared: “I introduce myself with my name and my partner’s name. I say: ‘We’re from Absolute Energy and we’ve come to install your insulation,’” Johnsy says. 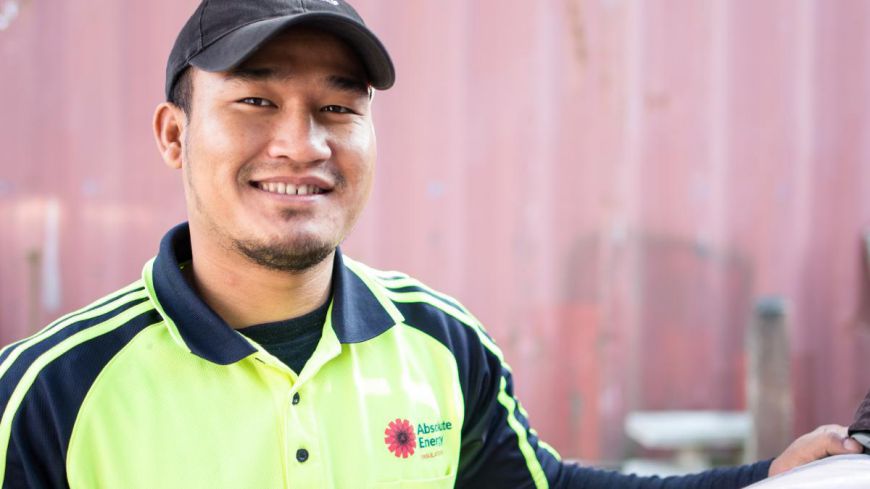 Paul says the course helped his staff improve in several aspects of the job.

The most important thing, he says, is communication with customers who are having insulation installed into existing homes.

“They learn how to relate to people in a New Zealand culture; to not be shy when you go to meet someone new, to be able to identify yourself and to let them know what you’re doing.”

Paul says the course has also helped his staff deal with the paperwork that comes with the job, including health and safety form-filling, understanding their employment paperwork, even filling in job cards. Johnsy’s partner on each installation job is also usually Myanmar Chin.

On the way in the company van, they can often be heard with the music turned up loud, singing gospel songs in their language.

But once on site, Johnsy switches to English, a process he agrees was helped by the Tertiary Education Commission-funded course. He and four Myanmar Chin workmates attended the course for two hours a week over the past four months.

“It’s good for me,” Johnsy says. “I’m better than before.” Johnsy has been in New Zealand for six years and worked at a market garden before taking the job with Absolute Energy 18 months ago, after Paul approached him at a football game. “We were growing cabbages, carrots and lettuce,” Johnsy says. “A lot of my Chin people were working there so then we didn’t really use English. It was difficult, but when I came to this job I’m getting better. “Even when people talk fast now, I can understand.”

Johnsy, 28, is married with a two-year-old daughter, Esther. He says although he was sad to leave Myanmar, he is grateful to be settled in Nelson. “I like New Zealand because it’s safe for us, and it’s very quiet and has very nice people.” The Myanmar Chin community in Nelson numbers about 500. Many of the men play football, and share a passion for fishing. Paul says having the men attend the course was worthwhile for his company. He ensured they could finish their day’s work in time for the 3.30pm class and paid them for half the time they attended.

“They’ve definitely learnt, and they’ve had a little bit of fun as well. The teachers make it enjoyable.”

Paul says the staff benefit from cultural aspects of the language teaching too. “It’s teaching them to be more forthcoming. They tend to be respectful and they don’t want to say the wrong thing.”

Tony Fitzwater, from ELPNZ Nelson, says his centre runs the courses throughout the year. The programme is suitable for residents who work part-time or full-time, and runs at most of the 23 centres around New Zealand.

Tony says the feedback he’s had is “outstanding”. “They (the participants) treasure it. They note the improvement in their language and their ability to function better in the workplace. They can understand directions and instructions and are able to communicate back to their supervisors and their peers. “The main thing, beyond language, is it gives them the confidence to participate.”

Paul Brockie says employing the men has been great for his company and says the men took pride in their learning on the English for Employees course. “They’ve had a really tough life so every opportunity they have to better themselves, they take.”